Check out this video for a recap of one of our recent trips to Clarkston, Ga working with refugees in this incredible city. From Cowee Valley to remote villages in Africa, we embrace the call to go and to make disciples!

Matthew 28:19–20
19 “Go therefore and make disciples of all the nations, baptizing them in the name of the Father and the Son and the Holy Spirit,
20 teaching them to observe all that I commanded you; and lo, I am with you always, even to the end of the age.”

Our Baptist Men have an active firewood ministry, build wheelchair ramps for those in need, and assist with disaster relief among other things. The Women’s Missionary Union leads the church in mission efforts such as care packages for the NC Women’s Prison, Operation Christmas Child, and collecting needed items for school children and single moms. Adult mission groups meet the Wednesday after the first Sunday of each month at 7pm. RA’s and GA’s meet every Wednesday at 7pm.

Find out more about these specific ministries below.

Love in Action is the motto and mission of Cowee Baptist. Every Wednesday our church assembles to engage in hands-on missions such as writing cards of encouragement; sending care packages to soldiers and cancer patients; delivering meals to the elderly, sick and homebound; praying over prayer requests and more. Love in Action culminates in a large Love In Action Day every May. On Love in Action Day the entire church family assembles and then disperses to do various acts of love across the entire county. 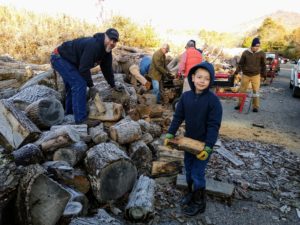 The purpose of BROTHERHOOD is to help Christians share the love of Jesus by praying, giving, going and becoming actively involved in missions with their time and talents. Brotherhood consists of the following age-level organizations: Royal Ambassadors (RAs), Challengers and Baptist Men (ages 18 and up). Cowee’s Baptist Men has vibrant firewood and construction ministry projects. The Baptist Men meet monthly on Family Missions Night (the 1st Wednesday after the 1st Sunday of each month) at 7pm. They also meet once a month, regularly, for group workdays at 8:30 a.m, every 1st Saturday morning after the 1st Sunday of each month.

Woman’s Missionary
Union challenges Christian believers to understand and be radically involved in the mission of God.

Pray for Missions
To pray for missions means to communicate with God on behalf of missions work, people involved in missions work, and people that need to know and accept God’s redeeming love.

Engage in Mission Action and Witnessing
The teaching and actions of Jesus recorded in the New Testament show us that the Christian faith is not stagnant but active and participatory. We are to share the gospel in word and deed verbally and through our actions.

Learn About Missions
Learning about missions helps believers better understand what God says about making His name known throughout the earth.

Support Missions
Christians have a part in upholding the cause of missions, maintaining missions work, and encouraging missions personnel.

Develop Spiritually Toward a Missions Lifestyle
For the believer, spiritual development involves growing in our relationship with Jesus Christ. It involves day-to-day living that applies and carries out the missions imperatives of God’s Word.

In 1888, a handful of women dedicated to the cause of missions founded Woman’s Missionary Union. Since that time, WMU has become the largest Protestant organization for women in the world, with a membership of approximately 1 million. WMU also was the first and remains the largest body of organized laity in the Southern Baptist Convention.

From the beginning, WMU’s main purpose has been to educate and involve women, girls, and preschoolers in the cause of Christian missions. It accomplishes these purposes primarily through age-level organizations.

Financial support of missionaries has always been a priority for women involved in WMU. When the women founded the national organization in 1888, one of their first items of business was to accept the request to raise money for the two mission boards. Within the first year, the women contributed over $30,700 to the two entities.

The women’s efforts to raise money for the two mission boards are known today as the Lottie Moon Christmas Offering for International Missions and the Annie Armstrong Easter Offering for North American Missions. The Christmas offering originated in 1888 and was named for Lottie Moon in 1918. The Easter offering originated in 1895 and was named for Annie Armstrong in 1934. The two offerings remained women’s offerings until 1956, when WMU agreed to promote the offerings churchwide. By the end of 1998, WMU had helped lead Southern Baptists to contribute nearly $2.5 billion to the two offerings.

Cowee believes we are to minister at home and to the ends of the Earth. From partnerships in NY City to our current work with the North American Mission Board in Clarkston Georgia, we encourage every member to set aside 5% of their year to be on mission locally and around the world.

Our church has aided in the drilling of wells in India and Africa and we are a large supporter of the Lottie Moon Christmas Offering for International Missions and the Annie Armstrong Easter Offering to support North American Mission Efforts.

God is glorified through unity and Cowee works with many other likeminded Christian ministries to glorify God and achieve more good collectively than we could on our own. Cowee engages in mission trips to New York City and is partnered with an inner city Latin congregation. Our church was also instrumental in founding one of the local cottages of Baptist Children’s Homes of North Carolina and continues to support this ministry. Cowee is also partnered with CareNet in helping feed and provide for the less fortunate of Macon County. In addition, Cowee supports numerous other ministries such as The Smoky Mountain Pregnancy Care Center, Relay for Life, Kid’s Place and more.